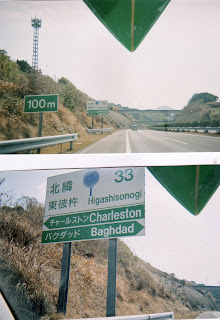 While we were living in Nagasaki we would travel to Fukuoka. There was a Costco there. You know, cheese, Ragu, stuff like that.
On the highway we passed this sign. 'What??? What did that sign say???'
We stopped and took this picture.
Baghdad? Charleston (USA?), we assumed and Higashisonogi, Japan. Ahhh, there on the same longitude. 33 degrees north.
Why would the Japanese have such a sign?
George Bush was President. He was presently bombing the hell out of Baghdad and he was using drone planes which were being operated by military people in Colorado that used longitude and latitude to target.

Why would the Japanese of all people be concerned about American Bombs?
Gee!

Humm, I wonder what cities are on the same longitute with our American targets in Afghanistan?