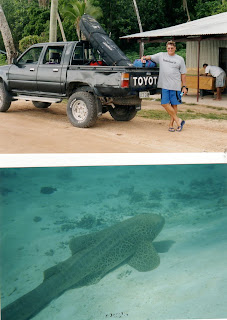 Went over to Kadavu for about a month. Stayed at Matava Ecological Resort. Nice Leopard Shark.

Kadavu has a barrier reef that pretty much encompasses the isle. Certainly along the southern coast. There is diving here that is extraordinary clear. BUT!!!, be aware of the tides.

If you are not familiar with tides in area that have lagoons or barrier reefs you can easily get yourself into serious trouble. Read the story here: 'Scary'.

On the main island in Fiji, Viti Levu there is a resort called The Outrigger. A fairly popular place. Nice people. Locally owned, I believe. There is an extended reef in front of the property. Snorkelers BEWARE! The outgoing tide there is treacherous! There have been several deaths where unknowing tourist have been sucked into the crevasses only to be released hours later. How long can you hold your breath?
Posted by Unknown at 6:44 PM 1 comment: 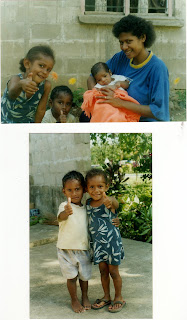 Our neighbors, Ruthie and her children.
Posted by Unknown at 6:25 PM 1 comment:

Living in a Fijian Village 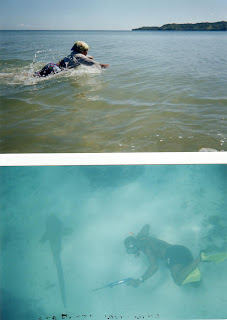 Without a doubt one of the most treasured friendships in my life is Milika and Mesu of Fiji.

We met Milika at the Waidroka Bay Resort where she worked as a housekeeper. We had no intention of staying at the resort for more than a week. We were shopping around for a place to rent long term.

Milika sharing with us some places that we might wish to check out, one day suggested that maybe we would like to stay with her and her husband. Her daughter was presently living in Suva with an Auntie and she had a vacant room.

We thought about it and went over to her house to meet her husband Mesu. We stayed for a night and then the next and suddenly we were living with her and Mesu in a Fijian village. Ruthie and her daughter lived next door. At night some of the neighbors would come over and lay on the woven mats while watching the local TV programs. Most of the programs where Oz shows. We would hear other villagers making Kava some evenings. Kava, if you are not familiar is a root which when crushed and smashed produces an intoxicating beverage.

We continued watching a TV series that we had been watching in Oz prior to coming to Fiji. Over the months that we stayed with them we went fishing with them. We celebrated Milaka’s birthday. I baked her first birthday cake. She cried. It was lopsided a little but she loved it just the same. We would shop for our dinner and shared the cooking with them. We became family. We became Fijian villagers. We could take showers in the shower but the best wash was in the stream that ran along the village edge. The water temperature was a little cooler than the shower but it was much more refreshing. One time I was washing some clothes and one item got away from me. It was either try to catch it bare footed or get to the bank of the river, get my slippers on and chase it. I forget which I did. All I can remember is Natalia having such a good laugh at me in the process. We hung them on a line next to our home there. Milika and Mesu had a female dog that was friendly. This poor dog hated the rain. It rains a lot in Fiji. This poor dog would sniff the air and suddenly make a frown on her face that though you felt very sad that someone would be so upset with rain, you could only go off snickering. I mean, this dog would look up at the sky and her whole face would just go into this most pathetic, ‘Wooooo is me!’ expression. She would slumber off into the house and crawl under Milika and Mesu’s bed until the rain would stop. You know how a dog gets that sad face when it knows it’s gonna get a bath and this is the most terrible thing in the world? This dog had it down. You could not but just get sad for its sake. After you snickered for a while.

We would get up in the morning. Milika and I were generally the first ones up. Who ever was up first would make coffee. Milika and I would discuss such important things like who was going to cook dinner and if there was anything that should be cooked. She would go to work. Natalia and I would go either surfing or painting. Mesu did odd jobs.

Milika and Mesu did not have a refrig so the shopping was on day to day bases for our cooking.

One day Nat and I were in a town of some size and it had appliances. We discovered a stainless steel refrig for three hundred dollars. We bought it and it was delivered to their home the next day. Milika cried again.

This refrig that we bought them. Very interesting. It wasn’t a gift. Though it, of course was by our standards. It was something that was needed and could be purchased.

Just you is fine!

I'm crazy about the good people of this world. They are so wonderful! Can't we spread the fiber of a web like Charlotte's Web and have a wonderful life together. Why not? I love you! You by a thousand different names. You, that if I single you out, may feel like you have to be someone other than who you are. Just you, is fine. Very fine! Really!
Posted by Unknown at 8:27 PM 1 comment: