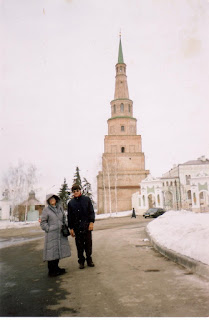 This tower was built in 7 days! Ivan the Terrible, Czar of Russia built it.
It was built in 1582 just after he conquered Kazan, the Kremlin of the Tatar State along the Volga River.

After a bitter war lasting over two years, Ivan brought in Swedish miners who dug under the Volga River and dynamited the Kremlin wall. The King of Tatar was killed. The Queen was a very beautiful women. Ivan wanted to marry her. She refused. After some time, he persisting, she said: If you can build the tallest building in Kazan in 7 days, I will consent to marry you.

Ivan the Terrible had his engineers design and build this 7 storied tower in 7 days. It leans a little.

The Queen, shocked said she would marry the Czar. She wished to convey her farewell to the Tatar people and called the Tatar people to the square around this tower. She went to the 7th tier and bid them farewell. She jumped to her death!

My sister Jeannie and best friend Shamil Fattakhov here. Jeannie was here in Russia to fulfill her life long dream of attending the Bolshoi Theatre in Moscow. We traveled through Kazan on our way to Izhevsk on the Siberian Train.

Jeannie as a child ballerina filled her dreams come true here. She passed away a year later succumbing to cancer.

God, thank you for letting me participate in this moment!
Posted by Unknown at 7:48 AM