This has been a radical year 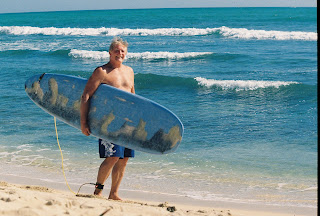 This has been a radical year for me. I seriously can’t believe what has transpired. But then it is actually a personal thing and how is this even remotely of interest to you .Well, if you’re a friend and have enjoyed any contribution on my part to your life, then maybe. I don’t know how it could be any more significant than that. But then also, sometimes we learn things from complete strangers.

You know it’s funny, those that have learned valuable knowledge tend to be reluctant in sharing it. It could be because they see the acquisition in terms of the process itself which can never be discounted. It reminds me of the number of instant millionaires and how they totally squandered it and ended up in more debt than they were to begin with. Knowledge is like that.

The thing that occurred and brought completeness to my life was not money but understanding what I wanted and living it. Here I am.

Butch Rovansek, my high school surfing buddy reminded me of it. He said, ‘We used to all talk about never growing up and just living on the beach and surfing for the rest of our lives. You’re the only one who has done it.’

I want to paint. I want to write stories and I want to surf. So, this is my life. I wake in the morning and make coffee, wash my face and pour cream into my cup so that I can pour the strongest first part of the brewing coffee into my cup. I go ‘on line’ and browse around –e-mail, facebook, nytimes- the columnist, the cartoons and somewhere something will spark an idea of a story. But in the background of all of this is the sound of waves washing in on the beach about 200 feet away and this may alter my morning pattern completely.

But if it has, I can pretty much scrap the second part of my love of life which is painting in water colors and I will do this after breakfast because I have learned that when I start painting it is a total absorption and I literally can suddenly realize that I need to turn on the lights and why am I starving?

And all of this occurs now because of Natalia and living with her and enjoying her relentless encouragement to write, to paint and to go surfing with her. And besides, a year ago I was living in the Bay area of SF and the water was freezing, we had to drive 45 minutes to an hour to get to the beach, which we did twice a week and then back again in some of the most congested traffic you can imagine.

Now all I hear are the waves, our neighbors cockatiel and the gentle flutter of the palm fronds in the trade winds. I can tell by the sound of the waves exactly what my day is going to be like as I open my eyes each morning. 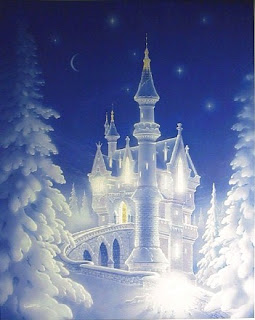 This is a story about the Crystal Palace. It is as true of a story as one can guess to be true having been handed down, so to speak, from one generation to the next until at least one Russian referred to it by note.


….A long time ago in Feudal Europe there was a very good King who was kind and caring for all of his constituents. It was a happy time and laughter was abundant. Smiles and well wishes and good will seemed to resonate from the King to the farmer, the merchant, the baker. It was a very happy place.

The King met and married a princess of equal nature, as she was also gentle and loving. A great day arrived when the King and now Queen announced at the city square the soon to be born first child of their union.

In this wonderful environment, the arts flourished. Music could be heard everywhere, the trades were of exceptional quality. In particular the trade of crystal making was renowned and there soon sprang the idea of a crystal palace.

It wasn’t long till their existed a palace of exquisite beauty and this was the home of the King, his new wife, the Queen and their soon to be born first child, but really it was more than just that. It was the pride of it’s people.

The day was eagerly anticipated and as the time for the birth came nearer there was growing excitement, for the peasantry’s well being of this or any Kingdom, clearly revolved around the stable legacy of the Kingship. It was all that was known then.

As the King and Queen were of such good nature and so happy, they would socialize and take walks among the populace. This was by comparison to other Kingdoms in the vicinity unusual. Most often the Royalty of any house kept to themselves. The King and Queen were always met with deep respect and bows most graciously were courtesly rendered upon their chance meetings.

Finally the day arrived and squire made an announcement that the Queen was in labor. It was not long till the entire kingdom was aware of this anticipated moment and an eagerness of anxious people everywhere waited for the announcement of the child. The hours went by and this was attributed to the normal length of first born children to a mother. Then more hours passed and a growing concern began to surface on the emotions of all. More hours and more. That day passed and the night and then the next morning. Almost if not all of the entire kingdom gathered at the main square just outside the Crystal Palace’s gate in solemn reverence waiting for any news. The day went by. At around mid afternoon more closer to late afternoon the Palace Squire came out and unrolled the scroll and read aloud: “ His Highness regrets to inform you that Her Highness the Queen has deceased giving birth to the Prince. His Highness would like you to say prayers for the Queen and for the new Prince.”

The assembled peoples were shocked. They knew something must have gone wrong but this? They stood there and could not move away. So many questions. So few answers. So many tears! And it started to rain!

A memorial took place with a great proceeding. It was of very somber affair. Everyone was in mourning and remained that way for what seemed a long time. Where there was laughter and cheers of good will, now there was a quiet of reflective mood.

Then one day the sound of an infants cry could be heard in the still of the morning and everyone was reminded of the last gift of the Queen, their heir air apparent, the new Prince and slowly but surely the mood shift of sober changed and once again the streets were more noisy and chatter of voices. The Good will returned. But then everyone was anxious about the King. He had not been seen. The period of mourning was expected but that had gone by and by and by. Of the populace, those who had relatives or acquaintances in the castle made inquiries about the King, his state of being. Even among these, there was scarce information. All that could be counted on for sure was that the King was in deep sorrow and remained so. The Kings brother, who was older than the King but who had stepped down in favor of his younger brother to be King – yes this was very unusual, but none the less it is what had occurred – became active in managing the affairs of the Kingdom at the Kings bequest and this provided some normalcy in the realm. But just barely so.

Six months were suddenly past and then a year. That year became two, then three! Then the Prince was suddenly out and about but never with the King. He remained a recluse to all but his closest court attendants and of course his brother.

Joy, none the less sprung from the people, seeing the new Prince and his seemingly good health.

With the Prince a new King someday and thus continuance of this realm. It was as vital as the very heartbeat of any living thing.

And the years rolled by, the Prince more in the public eye, growing each year and becoming a young lad then a young man but the King remained in seclusion much of the time. The only time that he was out was now for an occasional ride on his horse through the woods but even this was an act with no engagement, usually very early in the morning or at the dusk of some day.

The Prince seemed to have no regard for peoples thoughts. The King was not available having redrawn almost completely into a life of recluse, even having traveled to the mountains and been away for some time. The King’s brother had no control over the Prince now in his early 20’s and his ways continued in this vein of great lavish parties with far off strange people now having access to the castle freely and then suddenly the taxation system that had been in place for such a long time that no one could remember anything different, changed and increased. At first it was not a burden and everyone bore the weight with no complaint. A frown perhaps but more out of the uncertainty of, ‘why the change?’


And then it increased again! And it became clear that the growing lavish banquets that went on for days and days where the cost of this increase in levied tax and the realm with it’s peoples almost overnight became solemn.

The Crystal Palace a renowned and magnificent beauty with pride and luster adorned was suddenly not a concern and those who took great pride in the honor of her care suddenly found their position one of concern. Not the Palace. Where before there was great care and loving devotion to its maintenance, now was just a chore.

The Prince was taking on weight at a great pace. His breath was foul from the smoke and ‘what was it???. Some knew but were not adverse to say. Many women from far away now could be heard in all rooms of the castle. The Prince’s drunken laughter then the primary sound in realm. Day in day out.

The King returned and in his state of depression of which he seemed never to have recovered, barely noticed the fallen state of his realm and seemed not to even venture out on his rides which he at least did before.

And the realm fell into a place of disrespect. Places that were restaurants now had lounges and pubs and smoking tobacco which was introduced by the Prince was coming into common use.

The Kingdom that was a place of beauty signified by the Crystal Palace was now unkempt and gloomy. What was a shiny penny was now a dirty coin.

The Prince was now obese. Death came suddenly, he being barely 30! The King followed. The Kings brother was, being older than the King, and having not any wish to be King, his aptitude being less than capable found the task of this servitude more than he could bear. His death a year later left the gates open for other seekers of wealth and beauty to come calling upon this fallen realm and soon the crystal palace became what it is today a distant memory of some folk tales with knowledge for the inquisitive minds of those who would learn from it.
Posted by Unknown at 10:40 AM No comments: