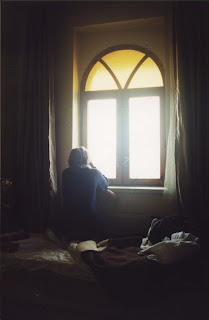 Without telling Natalia, I took out my camera and set the exposure and ‘click’.

We were in Turkey. This picture was in a town known for its natural sculptures.
This picture looks like a natural enough sculpture. Doesn’t it?

Turkey. Who would ever think of taking a trip to Turkey? As a vacation? Before you say, ‘Hadn’t thought about it.’, Germans come here in droves in summer. Lake Van. Eastern Turkey. There are lots of German restaurants.

Our trip to Turkey was a fluke. Natalia and I were in Izhevsk. I was teaching English at Udmurt State University there and Natalia was finishing one of her three degrees.

It was Winter break. From the 2 of December to the 15th of January. What to do? We noticed that at the Aeroflot office in the same building of which we lived, there were these really cheap tickets to Istanbul being advertised.

At first I dismissed it.

I casually mentioned it to Natalia. ‘Hey, Aeroflot is offering $99.00 round trip fairs to Istanbul. Cheap yeah? Oh, and by the way, what would you like for dinner?

‘Yeah, I was thinking of fish.’

We went down to talk to the agent. The next thing I know we have tickets to Istanbul. One month, Like the 4th of December to the 4th of January.

We take inventory of our finances and figure that we can hitch hike for the first part and then rent a car for the second part. You know, to economize. So that is what we do.

We travel all the way around Turkey. We hitch hike out of Istanbul and go counter clock wise around Turkey. We rent a front wheel drive Fiat in Mersin and continue east to Van and at the Iranian border, turn north – further East is not a good idea, haa haa!- hit the Black Sea, hang a left and another left at the end of the alphabet: Zonguldak, where we traverse the country back to Mersin. We arrive there on the 31st 2000. Just before the new millennium.

This is a short story Bob, focus on the subject.

Okay! Here, in this adventure, I want to share this with you. Eastern Turkey, Winter. Nobody in their right mind is traveling in Eastern Turkey in Winter! End of subject.
These cheap tickets to Turkey? They were for shoppers Bob! Russian shoppers that were going to Istanbul ONLY to SHOP. Not travel to NOWHERE. It was there, Istanful and back.

Well, wait a minute. I wasn’t the only one on this trip. Natalia was with me!

Okay, so you ‘two’ Leo’s: What do you have to say for yourselves???

Well, we made it!

It was very interesting actually!

Okay! So explain to us all, how ‘white on white’ (an Eastern Turkey Winter) is interesting.

Okay, I will! Look at us. Natalia a Russian. Robert an American. A Russian and American together, Hello!!!, in winter traveling along the Eastern border of Turkey next to Iran. Do you have any idea of how many military outposts there are along the Iranian Turkey border? I can tell you!

'Because they confiscated them?'

Exacto! See! You caught on right away. It was similar to my little adventure in Stockholm where I went on a Soviet Military Ship in 1965. What do you think? You actually think that an American (me!!!) is not going to try to step into Iranian territory, just to get away with it, being this close to Iranian territory? You do not know Bob Palmer!