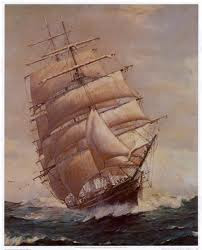 
The command of Captain Frances drew neigh and along the breadth of … of the ‘Golden Hind’. The Spaniards were one and all suddenly aghast and almost frothing at the mouth. Frances asked, her first in command, “What? What stirs the men such as this?”

“Aye Captain Frances, Aye.” Not taking his eyes, now riveted and narrowed, off of the Golden Hind. “That there be the ‘Golden Hind’. She is the wrath of all Spaniards. That lady of the Seas is Diablo himself to every Spaniard alive and those perished by her wrath and now gone. Wo betide this day Captain Frances. There shall not be one left of her crew at the end of this day.”

“Aye”, returned the Captain. “Aye, she is my sworn curse as well.”

And as Frances drew along side, the Golden Hind, the Pommies all smiles being so assuredly and smug, now all hands on deck to greet their fellow ‘English’ men. All their guns still encased and covered in canvas, there suddenly came a volley of one sound only.

Pete found himself in what seemed heaven, for the height at which be found himself to be, was now above what was then, those ships. A quick inventory and an account of all feathers, to make sure he was not the one made magic, returned to the Captains shoulder.

"Ahhh! Ahhh! Up yours! Up yours!", returned Pete. "How about a little warning."

The two ships now sailed in unison, together they’d be searching for two more.
Posted by Unknown at 4:57 PM