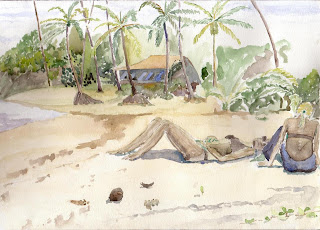 This painting is of two German twins. Identical twins. They were rendezvousing in Fiji at the Beachhouse along Queens Hwy. on Viti Levu. I asked them if I could paint them. There was no problem.

Natalia and I were staying down the road in a local Fijian village with Milika and Mesu. That was interesting. Living in a Fijian village. Talk about immersion. Like Kava?

This was in June 2002. Their winter, being in the Southern Hemisphere.

When you’re painting you study the postures. Here we have the one twin in blue pants sitting and sharing something of importance with the dearest and closest person on earth to her. The other sister in perfect listening mode.

I was in somewhat of a hurry as I wanted to ‘get it’ before there was any move on any part of them that would have changed the whole composition. I had not to worry in retrospect. They stayed in this position as you see them here beyond my completed work. Their conversation went on.

I can only guess at their conversation. Was it a relationship the one twin was sharing with the other? Neither had another companion there with them. The two of them were there with only each other. Was it a job opportunity that would require a change?

I almost felt as if I was eavesdropping on them, by studying and painting, though I was, as you can see, far enough away and with the lapping of the waves on the shore line not able by any means to hear a word. Not to mention, they no doubt were talking in German.

I certainly do not need to know what their private conversation was. I totally respect that.
Do you think that they might like this painting? Don't get me wrong. This a rather crude, 'Fun' painting to capture little highlights of Natalia's and my traveling. If I am ever contacted by one or both of them I’ll post it.
Posted by Unknown at 5:00 PM