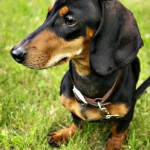 Some people, like me are sensitive to the well being of animals. This is a sad story about a pet. Don’t read it if you are too emotional about animals.

I inherited a black dachshund named Eric from my older sister while I lived in Hawaii as a young boy of nine or ten. She, my sister, moved to the mainland.

Eric was very well behaved and obedient. He was allowed in the house but not the kitchen. He had his own bed in the corner of our lanai. A lanai in Hawaii is a patio. He never jumped on furniture unless invited into your lap. It seemed uncanny but he knew our property and would go to the edge of it but never into the street or our neighbor’s yards. Really, the grass was the same with no fence of hedge, but he knew just like he knew an invisible line between the lanai and kitchen which, as I already said, he was not allowed.

I might go to baseball practice and he would walk with me to the property line and wait to be called but if not called, would sit and then lay down if told to stay.

He had little brown accent spots over his eyes, a brown muzzle and chest. Otherwise he was black.

He had his own doggie door from the garage to get into the house. He was free to go in and out as he pleased.

One evening a bunch of neighborhood dogs were in the street. A female was in heat apparently. The dogs were with the female. Eric heard them and went out and sat at the front lawn, not into the street. A car came along and saw the dogs in the street and swerved around them onto our lawn and ran over Eric. It was too late by the time they saw him. There was a woman passenger and man driving. They stopped and got out.

I had heard a sharp squeal and knew it was Eric. I ran outside to see him in the yard trying to get up. The woman was out and ran to him. The man came around the car. Eric snapped at the woman. He had never snapped at anyone ever before. He did not want them near him. I ran to him and picked him up in my arms. He died in my arms. The woman was crying. I was crying. The man was furious at the pack of dogs now down the street.
Posted by Unknown at 1:56 PM