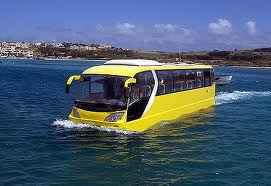 Too Cool for School!


The school children, boisterous and happy to be free from their daytime prison, came out of the building's main doors to the waiting buses. The short ride home, which was usually uneventful, suddenly turned into an adventure.

Halfway over the San Clement Street Bridge, the bus suddenly dropped, and splash! An expanse of the bridge had literally cracked under them and fallen into the river. The bus, unable to stop, was suddenly buoyed in the water and with the current, floating out to sea. Sandra, one of the students on the bus who was in a conversation with Deb, turned to look out the front window. All she could see was water, water everywhere. Bus number eleven was suddenly a boat heading out to the mouth of the river.

You might have thought that the seventh through ninth-graders would have panicked, screaming their heads off. Sandra candidly asked her classmates, turned ‘shipmates’, “Did everyone bring their bathing suits? Next stop ‘Channel Break’ surf spot.”

Laughter resounded in the bus-boat.

Bridget, the driver, was the one freaking out. She literally forgot which side of her phone to put to her face and, in her panicked haste, called ‘411’ instead of ‘911’,not even waiting to hear a ring tone.

Tom and Hank, sitting behind Bridget, looked at their adult driver-turned-captain, who was now stark white, and looked at each other and fulfilled the vacant mode of being grown up and responsible. Tom took charge and made the correct call to 911.

911 Police dispatch: “Tom Bartlett”, in answer to the first question. “Not sure yet. Do I have to push a button for more options?”, to the next question, ‘Medical, Fire or Police?’ “Me and my fellow Harbor Bay Intermediate classmates are on bus - now boat - number 11 heading out the harbor juuuust now going past the inner jetty”, in reply to the question of their exact location.

Looking at Hank, listening in as his phone was getting a busy signal for the same 911 number, Tom answers the next question with a “Probably! Maybe the Coast Guard. Oh Wait! Dispatch? You are Dispatch with the Police, aren’t you? Good! Good! I think we just got the attention of the Coast Guard.” Tom, Hank and the rest of the shipmates are all looking at the pier. “Yes! Yes! They clearly see us. I think our next ride will be on the cutter.
You want me to stay on the line? Okay! What’s your name? Helen Pereira? Ahh! Hold on Mrs. Pereira.”

Tom looks across the aisle at Jackie Mattice, his next door neighbor, and asks, “Hey Jackie, isn’t Pereira your Aunt? Do you know Helen Pereira at the Police Dispatch?”

Jackie answers, “She’s my aunt. You remember her!”

Tom says, “Yeah, yeah, yeah! I met her at your house once. You want to talk to her?”

Jackie responds with a frown, “No! She forgot my birthday!”

Tom turns to Jackie, telling her, “Jackie, she says she’s sorry! She will make it up to you.”

Meanwhile Bridget, remember the driver turned captain?, is filling out her resume for the Costa Concordia * and has finally discovered that her phone functions better when the receiver is facing you and right side up.

All the Boat number 11 shipmates are watching the growing number of Coast Guard sailors scurrying along the deck of their cutter, clearly visible puffs of smoke emitting from its stack. Shore lines are being thrown to the shore and, ah ha! yes, the cutter is casting off and coming to their aid. The bus-boat rocks as it floats by the first set of breakers at Channel Break and now the group of surfers all point to them.

Behind them, the cutter is flagrantly breaking all the harbor 5 MPH speed limit signs, which are posted in huge numbers on both sides of the river channel.  There are now turbulent wakes to both shores of the river’s edge. The unprepared boats at their moorings attempt to shake it off. Instructions are now audible from the speakers of the cutter as it is literally flying toward bus-boat number 11. “Don’t panic! Do not panic! Stay seated in your seats. STAY SEATED IN YOUR SEATS!”

Bridget, of course the only adult (?) aboard, is the first to disobey the blaring instructions as she rushes towards the back of the bus. I mean boat. She tries to unsuccessfully open the rear emergency door.

Bridget, seemingly getting bonus points for her resume for the Costa Concordia, continues to work the door but the force of the water from the outside –thank goodness! - is not allowing her to do so.

The entire shipmates shout in unison, “DO NOT OPEN THE REAR EMERGENCY DOOR. REMAIN IN YOUR SEAT!” This apparently registers with Bridget and she looks around and sulks back to the driver’s seat.

The cutter is now easing up alongside, dwarfing the bus-boat and several loud thumps are heard coming from the roof. Sailors have heavy ropes and as they look into the bus through the open windows, they ask the students to pass the ropes through and out the other windows on the other side of the bus.

In less than a minute, six heavy duty lines have secured bus number 11 to the cutter. The cutter now makes a tight U-turn and heads slowly back into the harbor.

As they are returning to the harbor and dock side, all the students wave at the surfers, who wave back. They can hear one of the surfers calling, “Better luck next time! Too cool for school!”

Suddenly, a ladder descends along the side of the bus and a sailor comes down and climbs through the window. Looking around at the calm, relaxed faces of the students and the horror-stricken face of the driver, whose lips quivering, he walks to Bridget and quietly tells her, “We’ve got it. Everything is good. You do not have to worry.”

Turning around facing the students, he says, “Okay Gangie, here’s the program. First, remain in your seats. We’ve got the bus completely secured. One by one, from both ends of the bus, at my instructions, you will proceed to the ladder that I came in on and go out the window to climb up the ladder. Several of my buddies are outside ready to assist you as you go up and get on the cutter. Everyone understand the program?”

“Okay. Good. From the back”, he points to a young girl, “you first.” The girl walks calmly to the middle of the bus and goes out the window, like she does this every day, where she is greeted by waiting hands from above.

“Okay, you next!” again pointing to another student.

... Now aboard the cutter, the assembled students talk quietly in groups.

Bridget has aced her commission for the Costa Concordia.

* Costa Concordia was the Italian ship which ran aground in the Mediterranean Sea killing 34 passengers all due to the ‘skills’ of the Captain who was the first to leave the ship.