The Tooth and Nothing but the Tooth, so help me God 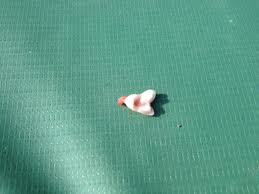 A friend of mine from Winnipeg Canada chipped her tooth which after a day or two came out. I had some super glue and we were going to glue it back into place but she could not fit the broken piece back onto its home. So she opted to put it in a little cup with water. She said she was going to take it home to Canada and let her dentist deal with it.

It sat there in the little cup for a few days.

One night I woke up and was thirsty and walked down to get a glass of water. I got a glass from the cabinet and filled it with water and drank it. I set it down on the counter and hit something. I flipped on the light and realized that I had put the glass down on the cup with the chipped tooth in it. But now the cup was on its side and though there was a residue of water in the cup the chipped tooth was gone. As the light that I had just turned on was an under the counter light I looked around on the counter to find the tooth but it was not there. There was a trail of water to the edge of the counter. I stepped over and flipped on the central lights for the entire kitchen and looked around for the tooth on the floor. It was no where in sight. I looked around section by section. Still no tooth. A little frustrated at 2:30AM I sighed and walked into the pantry to get a flash light. I thought I could kneel down and scan the floor at floor level. So I did. I moved the flash light slowly around and around the around until I had made a full circumference. Still no tooth.

Oh God! It must be under the refrigerator or the stove. I went up to the refrigerator and shined the light under it. No tooth. I went to the stove. Same thing. No tooth. I made another pass over the floor and was almost ready to give up and prepare my confession to my guest when I saw a little off-white piece of something in the corner. I crawled over and picked it up. Ah! The tooth. I proudly picked up my found piece and set it in the now righted cup. Filled it with water to what I had remembered it to have been. Turned off the lights and was off the hook as I went back to have a peaceful nights sleep.

I woke and as I laid there in bed heard my visitor in the kitchen and smelled coffee. I got up and went down to join her. I remembered the tooth and glanced over to the place where it had been the night before.

It wasn’t there. I looked around as inconspicuously as possible for the cup. But it was not there.

As I did not want to volunteer any mishaps I let it slide. The day went by with no mention of the tooth.

The next afternoon while dealing a hand of cribbage I casually mentioned, “Lorraine, I just noticed that your tooth is no longer in the little cup which you were keeping it.”

“Oh”, she says, “I threw it out. My tooth doesn’t hurt and my dentist can just fix it when I get back.”

“You threw your chipped tooth away?”