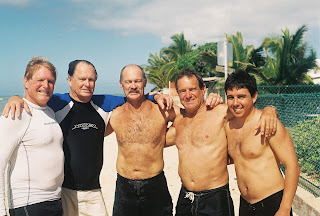 They all agreed to meet at the old baseball diamond where they used to play when they were kids. That was many years ago. Although there had been many changes in each of their lives since then, "the field" was, and will always be, "their field".
At the field, he turned off the street onto the grass that ran up to the grandstands along third base. That would be the place they would park.
No one else had arrived yet. He glanced down at the clock on his dashboard. "Seven-eighteen" he thought to himself. He was early, as usual. In this case though, he knew he would get there early just on the chance that...
He looks up at his rear view mirror and sees another pick-up truck turn off the road and maneuver its way next to his own. He rolls down his window and looks across the passenger seat to see his old friend, Kurt. He gets out and walks around in front of his truck towards Kurt’s truck just as a third vehicle pulls up next to the two of them. The glare of the headlights did not stop the first two friends from embracing each other in a friendly hug.
Once the lights of the third vehicle turned off and their eyes adjusted, they confirmed that Bob had finally arrived. He got out and joined his friends, “Hey you guys!”
Another embrace. Smiles. “Well, here we are... I know we're all a little early, but... "Anybody bring their glove?”
“Ha! Nope?”
It was quiet now... awkwardly quiet, as the three of them stood there, their hands in their pockets, each of them not knowing what to say, or what to do next. They instinctively walk over to the bleachers and sit down. Everyone remains quietly still.
The three men simultaneously look up at the sound of screeching brakes just as a fourth car pulls off the county road and comes to a stop next to their cars. Yep, it was Chris. He gets out and walks over to them and sets down the vase on the seat next to him.
“Well, let’s do this.”
Chris picks up the vase and transports it reverently as the four grown men make their way across the bleachers and through the opening in the fence into the playing field and out to short-stop.  There they remain silently standing for a moment in a circle.
Chris then says to the other three men, “Are you all ready for this?”
They all nod. “Okay! Turn around".
They all turn around and look out in the opposite direction from each other. Chris takes the vase and removes the lid. He grabs the base, holds it out in front of him, and then chaotically swirls it high above their heads causing the contents to fly everywhere. There, in the near-pitch darkness between second and third base, the men could hear the debris and slight whistling of the vase being swung about.
“Okay?" Chris asks. "On your marks. Get ready, GO!"
The four men dash about and scramble to collect the pieces. Everyone laughs and grabs what they can in the darkness. They push and playfully shove each other. It’s pure pandemonium. Finally, they slowly come to rest, each with their hands and pockets filled and chests heaving heavily for more oxygen.
They walk back through the infield, past the gate leading up into the bleachers along the third base side of the field. It is there, next to the single security light pole fixed to the food shack, they are able to lay out all of their pieces of wrapped candies. Each of the men slowly counts their booty.
“32”.
“27”.
“Ahh 36”,
“Shit, 25, again!”
Everyone laughs. “Well Chris", Bob says, "it looks like you're buying again!”
“I know. I know!”