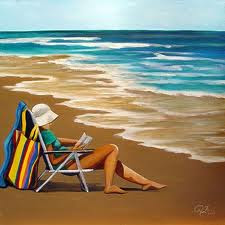 He was out for his daily walk on the beach when he saw her, reading a book, minding her own business.

She had a colorful big rainbow spreading hat on. Or was it a white hat and a colorful beach towel drapped over the back of her beach chair? The beach chair with arm rests. Her exposed skin outside the shadow of her hat was glistening in the sun. The coconut smell was the dead give away – tourist.

He was reminded of a silly joke that he had heard years ago. ‘If it is tourist season why can’t we shoot them?’ He chuckled to himself. She looks like she’d be a nice trophy.

But, she seemed like a nice person. Why? Composure? Maybe. Very much into her book. Must be a good one. From the angle of the book in front of her he could not tell what it was.

He strolled on past her along the beach. Just glancing in her direction not wishing to stare or disturb. Tourists and their vacations – way too short. So glad to now be retired. Doing all the things that he loved and now filled his days with. Reading like her, writing things like this.

The calm of early morning was just now giving way to the trades which would be increasing as the sun climbed higher, passing over the island. A gentle fragrant breeze now. The calm of the sea giving way to the ruffling texture of the light winds across the surface. On a tropical equatorial isle, the only real means of knowing what season it is. But if you stayed here long enough and lived for years, you would note the different floral accents: plumeria summer, gardenia and pikaki fall, ginger winter and spring Jacaranda.

The mind wonders on walks. While you are on sensual perception mood your mind is all over the place with no rhythm or apparent reason. Suddenly you have a thought that knocks on your door of consciousness, ‘By the way', says this inner voice, 'What about this and what about that? Are you going to just keep ignoring these issues?’ ‘Yes. For now’, you say to yourself.

Along the beach front are numerous places that have become pleasant scenes which you have found yourself looking for on each of these walks. The outrigger canoes from the two clubs at the park. The Koolau Mountains running perpendicular to the beach on the far horizon. The white sandy beach at tides in and out scrolling with coconut trees, iron woods at the properties edge to someone’s place. The two wooden ornamental wooden owls under the eves of the A-frame to keep the doves and pigeons away. Hummm, it seems to work. And every house different. Some seeming to fit the mood of the beach much more than others. Others some idea of what ‘I’ want to live in – no matter where. But it all fits. And is pleasant. And then, then there is the vast and seemingly endless blue Pacific with the waves themselves now finally coming to rest on the beach for their Hawaiian Holiday.

Now at the end of the park, turning around and heading back to his own beach front home, he sees up in the distance the lady still there. A solitary person having found this secluded beach. And just to think, she found this paradise only 8 miles across from Waikiki which throngs with hordes of tourists having to wait in line to eat at all the restaurants. Crowded. Noisy. Some vacation. Well, she seems to be into her niche.

Now coming back along side her again from the opposite direction she is still engrossed in her read... still can’t make it out. Oh well!

Another time. Another place perhaps.
Posted by Unknown at 2:48 PM