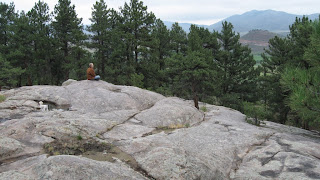 Dawn, with its cool crisp mountain air, the hilltop overlooking the valley and river below, pines and cedars giving way to the high sierra dessert in the distance. This was Brett’s favorite place and time of day.

Shelby had given him this treasure with the cabin behind him and the surrounding hillside acreage as an unexpected inheritance. A place to find seashells far from any sea; a place filled with summer memories as he grew up to become a man - to take walks with Shelby and make sense of the world that he would become part of. A place, in fact, that had given him his greatest gift.

Shelby had always been just Shelby. Brett never called him grandfather. He was the man that his Grandmother would find solace with after Brett’s maternal grandfather passed away unexpectedly before Brett could ever know him.

There in the distance an eagle rose in the warm thermos to glide out and then back in, now almost directly over head, a master of the sky. The eagle considers every angle from above, a terrain that he knows as well as his talons which he keeps clean and sharp.

A rustle in the leaves brings Brett’s attention to a movement in the open bush where he hears a scamper and sees little puffs of dirt kicked up into the air. The hare dashes at sharp angles but the eagle anticipates his every move correctly. A few swooshes of his wings and then the silence resumes.

A stone tumbles down the slope of granite under Brett’s feet and finds a new resting place as he gets up, turns and makes his way back to the cabin.

Well, it had now come to this.

Reaching the stairs leading onto the deck, he opens the door to the cabin and reaches for his cell phone and dials a number. While he listens for his call to be answered, he steps out again.

“Brett, I’m so sorry it’s come to this. If that’s what you really want, come in and let’s get this started.”

”Will do. When can you have it ready?”

“Good enough, Steve. See you then.”

“Figured as much.  Later, Brett.

Brett pushes the ‘End’ button, and slips his phone into his pocket.

From the deck, he looks out over the valley and then walks towards the cliff trail, subconsciously thinking, this may be my last walk here. He picks up the pace, scouring the valley where he sees the river at its base. Back and forth, he scans this beautiful vista that he’s loved all his life. Ahead the trail curves around the promenade point. He slows his pace there and then stops. He breathes deeply.

Brett and his wife, Sue, had spent all of their vacations and spare time here at the cabin.

Now sitting on their favorite boulder at Promenade Lookout, Brett recalls the first time he had seen Sue. Trespassing, no less! He watched her come unto his property, climbing over the ridge just below him and sauntering nearer and nearer, and, without noticing him, she had turned around to look out over the valley. She stood there and slowly scanned the horizon in apparent awe of its beauty. Then she sat down on the same boulder he was sitting on at this very moment, contemplating the scenic view, seemingly unwilling, or unable, to leave. After about twenty minutes, she got up, dusted the back of her jeans, looked around again and met Brett’s eyes, watching her!

To this day they have joked about what was said between them. She was flustered and felt spied upon. He told her she should have known that this was someone’s property – not a National Park with marked trails. But she had been all the more defiant.

“Well then! What do you expect?”

There was total silence as they sized each other up. And liked what they saw!

Brett was the first to break the silence. “Well, you don’t look like you’re up to too much mischief. Enjoy your hike. My name is Brett. Brett McCormick.”

She stepped forward to shake his hand, smiling and showing her dimples. “Hi, my name is Sue. But don’t sue me okay?”

They both had laughed.

Now he reflected back and thought of that first encounter. Okay, I won’t sue you, Sue! Hell! Now I am selling this property for you. For us.

With a heavy heart, he remembers that horrible day. After going to her doctor, it was here that she had told him that she had discovered two lumps on her breast and they were malignant. She had cancer.

Now years later, after a period of remission, the cancer had returned. The insurance company was not going to cover additional medical care costs because of a release form they had signed after Sue had gone into remission. They should have known.

Thank God for this property. Selling it will ensure we’ll be able to manage the treatments without the stress of worrying about money.

I will miss this place.

But Sue is my greatest gift.  And I would miss her more.